Our first papi is a full-time student. Part zacateco and part chilango, DOMINIC loves to show off his uncut cock for anyone who wants to watch--men or women. His piece is so hot even the camera man had to cop a feel.

This hot, straight carioca taxi driver from Rio de Janeiro has been San Francisco for only six months. His stories of fucking in the back seat of his cab were so hot that he had all of us reaching for our pirocas. He invited us to film him in Brazil at his place in Humaitá, on the South Zone of Rio.

ANTONIO took the afternoon off from his job so we could film him. His only fear was that his girlfriend might call while we were filming and realize he wasn't at work. When he's not working, he is busy dj'ing.

We met MIGUEL cruising around Dolores Park in San Francisco. This cabrón has two girlfriends yet still finds time to get his cock sucked by eager mamadores. This was his first time on film, but he told us that one of his fantasies is to fuck a man with that huge mushroom head of his while his chicas watch, and that maybe he would let us film it. We're keeping our fingers crossed! 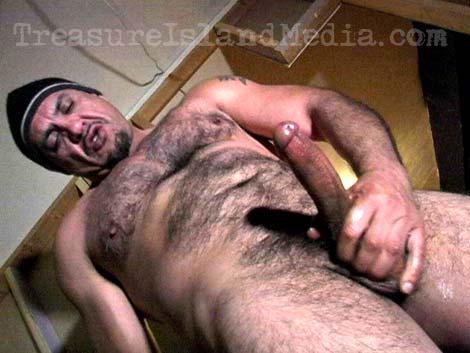 AMARO and I run an apartment renovating business in East Los Angeles. It didn't take much to get us to take a break from work to show off our vergas. I love stroking my uncut blatino cock for the camera and eating my own load while Amaro shows off in another room.

We found Salvadorean-born DOUGGY on the corner of 18th and Mission in the Mission District of San Francisco, taking a break from his job as a barbero. The minute we saw the bulge in his sweat pants, we knew he had to be on film.

This down-low boricua is studying music at NYU. He dreams of being a famous Reggaetón artist like Don Omar. On the weekends he loves to bomb trains at the depot, his favorite cruising spot. The stories he told us of taking loads in abandoned trains got us so hot, we had to take cold showers.

This is AARON's first summer off from High School before beginning his Freshman year at City College of San Francisco. Just last year this Colombian papi woke up to his hambre for cock while showering after soccer practice and since then he plans on studying his ass off and sucking as much cock as possible. We are always glad to give an intelligent mamador a chance to strut his stuff.

On most days, you can find JOSHUA in his artist studio in Venice, California. He studied in Mexico before receiving his teacher credential in California. He also plays trumpet for an amateur mariachi band. With such a busy schedule we were impressed to find out that he hosts monthly fuck sessions at his studio which he fills with the hottest cholos in LA. ¡Así nos gusta!